Raitt made the announcement today at a roundtable meeting in Toronto with trucking company executives of the Canadian Trucking Alliance. CTA, which is a federation of the provincial trucking associations representing over 4,500 Canadian trucking companies, is a strong proponent of requiring both safety technologies.

“We commend the minister for her leadership and look forward to continuing to work with her on the legislation mandating both ELDs and roll stability,” said David Bradley, CEO of the Alliance. “We now call upon all of the provincial governments to work with Minister Raitt and CTA to help make this a cooperative country-wide effort.

Ontario Transportation Minister Steven Del Duca is the only provincial transportation minister who to date has publically declared support for a national ELD mandate. 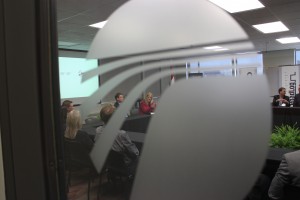 “We are working actively with our stakeholders and provincial partners to support increased safety for Canadians and Canada’s trucking industry through innovative technologies such as electronic logging devices and electronic stability systems,” said Minister Raitt.

A Transport Canada press release also says the measures are “consistent with the Government of Canada’s commitment to align with U.S. vehicle standards.” U.S. rules mandating ELDs on all trucks where the driver is currently required to complete a paper log book and the introduction of a manufacturing standard requiring all new heavy trucks to come equipped with roll stability control is expected later this year.

The minister said it isn’t often that an industry comes to government seeking regulation, so when one does you need to listen. “It is a strong indication of the industry’s commitment to safety,” said Raitt, adding that commitment to public safety is a key part of her and her government’s mandate.

Raitt also expressed support for a regulation involving electronic stability control on commercial trucks. “As regulators we’re looking at it to make sure we put it as a mandatory aspect of trucking in Canada,” she told trade media gathered at CTA’s office. “It’ll (prevent) accidents from happening on our roads and it’s also very good for the movement of goods in places like the GTA.”

ELDs are used to track, collect and record electronic data on a driver’s hours of service compliance. The Canadian federal hours of service regulations were designed to be consistent with the science of fatigue and fatigue-management principles.

Roll stability systems help protect against loss of control accidents by automatically intervening by reducing engine torque and engaging the engine retarder, while automatically applying drive axle and trailer brakes. The activation takes place before the driver is aware of the need.