Mark Seymour, president of Kriska Transport, has always been steadfast in the belief that to be part of an industry means contributing to its overall health.

It’s this principle that’s helped his trucking company grow into one of the largest and most respected in Canada while also helping to shape the direction, as chair, of the Ontario Trucking Association (2006-2008 & interim in 2010 ), the Canadian Trucking Alliance (2014-2016) and the CTA Blue Ribbon Task Force on the driver shortage (since 2011).

Seymour, who was instrumental in the creation of BRTF, officially stepped aside as the long-time chair of the Task Force at the CTA’s annual general meeting. CTA named, Doug Sutherland, President, Sutco Transportation, as the new chair for the 2020-22 term and Heather Day, President, C.S. Day Transport, as the Vice Chair. 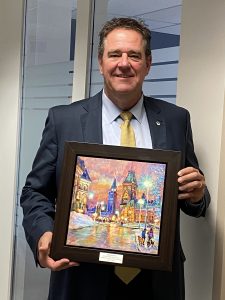 “As an organization, we foresaw the human resource storm brewing in the trucking industry,” said Seymour, who over the years has taken active roles in improving carrier-shipper relations at both the OTA and CTA. “We took action by creating the BRTF in 2011 and by working closely with groups like Trucking HR Canada and the Conference Board of Canada, we have been able to quantify the growing driver shortage problem and propose government action and potential solutions throughout the supply chain.”

Through the BRTF, political leadership across the country and companies throughout the logistics sector that depend on trucking services have been made aware of the labour crunch facing the industry and the effects on the supply chain.

“So much of what we do today regarding human resource issues started in meetings of the BRTF, led by Mark Seymour,” said CTA president Stephen Laskowski. “From driver respect campaigns; immigration modifications; mandatory entry-level training; involvement in the provincial nominee program; to the upcoming industry recruitment-image campaign, we required strong leadership and fresh, new ideas, and Mark certainly provided it. We are eager to continue down the road paved by him and other founding members of the BTRF.”

Mark closed chairmanship at the CTA AGM by offering these closing words of encouragement to the CTA BRTF process:

“It been an honour to lead discussions with so many people keenly interested in this challenge we all face. It may not always feel like we have a shortage, but we all know it is there – and here to stay unless we face the reasons it exists. It’s a tough job, but one we all must appreciate and respect. We’ve tried to shine a light on the matter since the beginning of the BRTF and I’m grateful to have been part of the process – one that’s far from over and now in the good hands of Doug and Heather, two very passionate leaders.”