The change in the value of U.S.-Canada freight moved by truck increased the most of any mode during October, growing 4.7% over the same period last year. 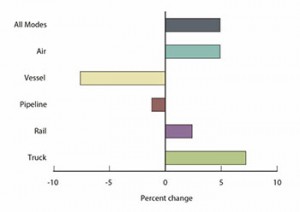 Overall, the amount of freight moved between the U.S. and its North American Free Trade Agreement partners of Canada and Mexico increased in October compared to the same time a year ago, hitting the highest level on record.

The value of commodities moving by truck grew by the largest percentage of any mode, 7.2%. Airfreight increased 4.9% followed by rail at 2.4%. Pipeline and vessel shipments declined 1.2% and 7.6%, respectively.