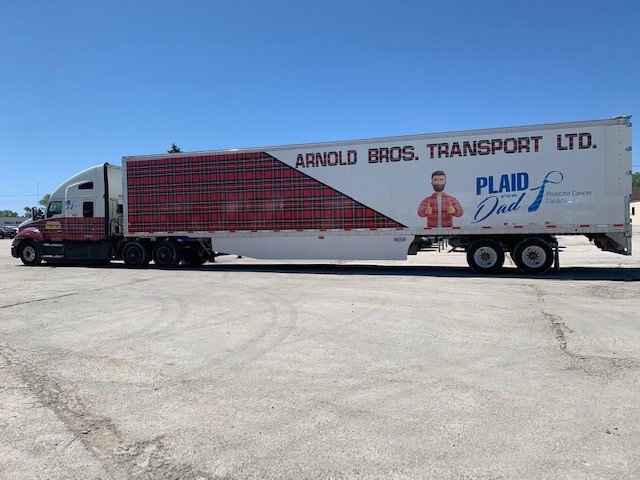 Arnold Bros. Transport has announced that in its sixth year participating in Plaid for Dad’s campaign to fight against prostate cancer, the company raised a record-setting $33,550 – about a fifth of which came from staff at the Winnipeg, Calgary and Milton locations.

“This year was an exceptional campaign as we were back to in person fundraising events. We raised funds through many BBQs, an early morning breakfast on the grill, 50/50 draws, gift baskets, and specially created plaid doughnuts from Oh Doughnuts – local to Winnipeg,” says Gary Arnold, executive VP.

“The support we received from customers, suppliers, owner operators, colleagues and friends was unprecedented this year. We are beyond thankful for the wonderful and continued support we receive from these exceptional partners.

Plaid for Dad has quickly become a fun and easy way for Canadians to celebrate dad and help the one in eight men who will receive a prostate cancer diagnosis in their lifetime. When detected early, survival is close to 100 percent.

Since the charity’s inception, the trucking industry – and CTA member carriers in particular, have been the top fundraising workplaces in Canada. Sutco Transportation Specialists of Salmo, B.C. is a former three-time top fundraising champion. Arnold Bros was the top fundraiser in 2017. Other CTA carriers Plaid for dad participants like Tandet and Steed Standard Transport are and perennially on the Top 10 Workplace list.