Truckers Are Defending Champs in Fight Against Prostate Cancer 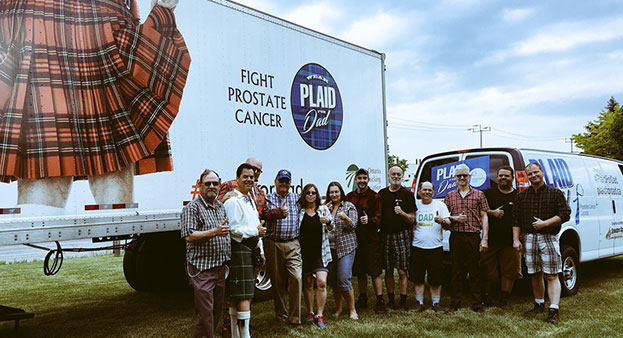 For the second consecutive year, truckers led the battle against prostate cancer by raising the most money of any organization in Canada during Prostate Cancer Canada’s increasingly popular #PlaidForDad fundraising campaign.

Canadian Trucking Alliance carrier members took the reigns from the Ontario Trucking Association (which led all organizations in 2016 with over $31,000) and raised nearly $49,000 this year, making CTA the nation’s #1 fundraising organization. (See full list here). CTA would like to extend a special thanks to carrier member Arnold Bros. of Winnipeg, which alone raised about $16,500 of the total.

“You’d be hard pressed to think of a more fitting group to transport a good cause across the country than the fine men and women of the Canadian trucking industry,” said Prostate Cancer Canada CEO, Rocco Rossi. “We saw it last year when the OTA led the country in fundraising, and we saw it again this year in expanded form with the CTA. He Alliance not only spread the word about prostate cancer far and wide, but again raised the most money of all the wonderful organizations that took part in this rapidly growing annual campaign. On behalf of the 1 in 7 Canadian men who will be diagnosed with prostate cancer in their lifetime and their families, I can’t thank the CTA enough for their ongoing commitment to making a difference in the fight against the most common cancer in men.”

CTA kicked off the #PlaidForDad in May. Carrier members from across the country rallied for the cause, promoting the campaign on social media; holding company events like BBQs, contests and donation drives; or wrapping their tractor-trailers with plaid and other related graphics. Steed Standard Transport’s James Steed and his dad (a prostate cancer survivor) even bought a plaid-clad van for a bucket list, cross-country drive from Alberta to their home in Stratford, Ont. to promote the cause at various pitstops along the way.

“I couldn’t be prouder of the CTA’s member organizations for how they rallied to bring attention to this very important cause,” said CTA Chairman Gene Orlick, president of Orlicks Transportation. “Once again, our industry led by example.”

The first-place finish means the coveted ‘plaid jacket’ – a recognition for finishing as the top organization in Canada – will stay at the CTA/OTA offices in Toronto.

CTA would like to thank Prostate Cancer Canada and Rocco Rossi for their partnership on this campaign – and especially the CTA carriers, provincial associations and Team Canada allied trades members – as well as the non-member, individual trucking industry workers that were kind enough to donate to the cause.