Thanks David! OTA Honours its Leader With Prestigious Award

Ontario Trucking Association CEO David Bradley was honoured last night by the industry he has tirelessly led for over 30 years.

Bradley spent more than three decades handing out the OTA-Shaw Tracking Service to Industry Award to a long line of trucking leaders, but this time it was his turn to receive the most prestigious industry honour. Bradley was presented with the award last night at the OTA’s 90th annual convention and executive conference in Toronto.

As the longtime president of both the Ontario Trucking Association and Canadian Trucking Alliance, Bradley – who plans to retire at the end of 2017 – has been a passionate, devoted supporter of trucking across the country. With great success, he has consistently established trucking safety, positive public image and environmental responsibility as the key elements of his vision for the industry.

“Simply put, the Ontario trucking industry is the safest, most efficient and most respected in North America because of his leadership,” says OTA chairman Scott Tilley, President of Tandet. “This industry owes him a lot.”

Bradley joined OTA in 1985 after a short stint as an economist, before being named president in 1991. It was a baptism by fire for the new president. Operationally, the industry was still adjusting to the aftershocks of deregulation while the issue of truck safety was starting to heat up and dominate headlines after a series of high profile wheel-offs.

Seeing safety oversight as his number one objective, Bradley and the OTA staff helped draft the most ambitious review and comprehensive reform of truck safety regulations in Ontario history.

Under his watch, OTA would go on to guide the industry through several more waves of turbulence, including a couple of recessions, the 9-11 attacks and thickening of the Canada-Us border, episodes of labour unrest and a series of tough environmental regulations. Over the past 25 years, OTA has also secured countless policy victories in areas like tax reform, weights and dimensions standards, mandatory speed limiter activation, hours of service changes and the upcoming electronic logging device mandate.

According to the carriers who have worked with Bradley as he presided over their industry association, his most impressive attribute is his ability to communicate, using persuasion, persistence and a tenacity for promoting the industry and bringing people together with diverse points of view.

An ardent hockey fan, he was credited with convincing the Canadian and American governments to agree to name the new Detroit-Windsor bridge connection in honour of one of his favourite players, Detroit Red Wing legend, Gordie Howe. 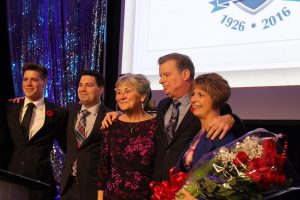 “He may have been a late arrival to the industry. But talk about embracing it! He’s as passionate and as dedicated as anyone I’ve seen,” says Dan Einwechter, CEO of Challenger Motor Freight. “He’s been relentless in promoting polices which have made the highways safer for both truck drivers and the public. But perhaps his single biggest achievement is the heightened respect he’s won for our industry over the last 25 years.”

Bill MacKinnon, of MacKinnon Transport and a former OTA Service to Industry Award recipient, reflects fondly of Bradley and his contributions to the OTA:

“He’s a straight shooter. He’s honest. He’s never given up on anything. The association has grown by leaps and bounds under him. He is most deserving of this award and should be proud of everything he has done for trucking and the OTA.”

In a letter to the OTA and CTA Boards when he announced his planned retirement earlier this year, Bradley expressed his love and respect for the industry and its people:

“I am humbled by the trust placed in me and hope I have been worthy of it. The role – for me it has always been more than a job – has its challenges and requires certain sacrifices, but the rewards are enormous. Getting to know the industry and Canada has been an amazing experience. Being able to view our industry through an international lens has led me to the unequivocal conclusion that Canadian carriers are second to none in service, innovation, safety and environmental stewardship.”