Inbound Logistics’ exclusive annual survey of shippers and truckers, which attempts to map out find the industry’s most significant trends and challenges, reveals that finding a truck – and not paying too much more it – are the two biggest concerns for over-the-road shippers.

A whopping 78% percent of shippers who responded to the 2018 survey say they’ve endured rate hikes, apart from fuel surcharges, this year –a sizeable jump from the 60 percent who saw price hikes in 2017, according to the publication.

Among shippers who responded to the survey, 62 percent say they have experienced a shortage of truck capacity.

When asked to list the biggest challenges they face, 52 percent of shippers who responded to the survey name finding capacity” and 56 percent name “reducing transportation cost.” 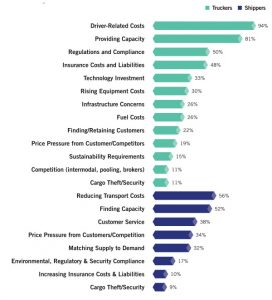 Relatedly, those two issues represent even bigger challenges for trucking companies. Eighty-one percent of carrier respondents list “finding capacity” as one of their greatest challenges, a big jump from the 41 percent who gave that reply in 2017. And a vast majority—94 percent—list driver-related costs as an important concern.

“But how do you compensate drivers for detention?” he asks. “A constant challenge is figuring out how to equitably pay drivers when they’re not driving.”

Along with cost and capacity, one thing shippers care a great deal about is the quality of service they get from a trucking company. When asked to name the most important factors they consider when choosing a motor carrier, 84 percent mention reliability, and 62 percent name customer service. Not surprisingly, price is also a big factor, mentioned by 73 percent of shippers.

Carriers also continue their commitment to promoting sustainable operations. Among respondents, 96 percent report they are certified through the Environmental Protection Agency’s SmartWay program, up slightly from 92 percent in 2017.

One bit of data that emerged from the survey points to a strong sense of optimism, at least among carriers. Asked in 2017 which way they thought the economy was trending, 71 percent of respondents at trucking companies answered “upward.” In 2018, that number is 88 percent.