Preliminary findings released by the National Transportation Safety Board on indicate that the autonomous vehicle control system onboard a Tesla Model 3 electric car was engaged when the sedan collided with a tractor-trailer near in Florida on March 1.

According to the NTSB report, the Tesla struck the left side of the semitrailer. The roof of the Tesla was sheared off as the vehicle went underneath the trailer. The 50-year-old male Tesla driver died as a result of the crash. The 45-year-old male driver of the tractor-trailer was uninjured. 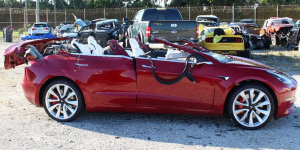 NTSB said preliminary data from the vehicle show that the Tesla’s Autopilot system— an advanced driver assistance system (ADAS) that provides both longitudinal and lateral control over vehicle motion— was active at the time of the crash. NTSB said the driver engaged the Autopilot about 10 seconds before the collision.

From less than eight seconds before the crash to the time of impact, the vehicle did not detect the driver’s hands on the steering wheel, according to NTSB. Preliminary vehicle data show that the Tesla was travelling about 68 mph when it struck the semitrailer. Neither the preliminary data nor the videos indicate that the driver or the ADAS executed evasive maneuvers.

NTSB is continuing to gather information about the crash and plans to examine the driver of the combination vehicle, the motor carrier, highway factors, and survival factors as next steps in the investigative process.