With less than a decade passing since EPA’s 2007 engine emission rules, more than 37 percent (and rising) of all diesel-powered medium and heavy duty commercial trucks are now equipped with “clean diesel” technology (model year 2007 or newer).

According to a recent report from the Diesel Technology Forum, nearly one and four (22%) of those are powered by the newest clean diesel technology (2010 and later model year), which virtually eliminate both nitrogen oxides and particulate matter.

DTF says the fuel efficiency benefits of more modern engines is one of the main drivers of their increased uptake, though simple equipment turnover schedules play a large role, too.

The analysis of the penetration of modern diesel engines was based on data of Class 3-8 vehicles in operation compiled by IHS Automotive in all 50 states through the end of 2014. 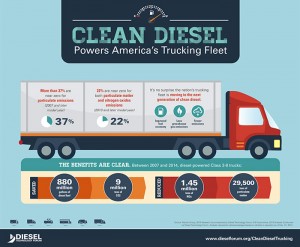