Majority of Canadians Believe Govt Should Step Up Enforcement of Driver Inc: Poll 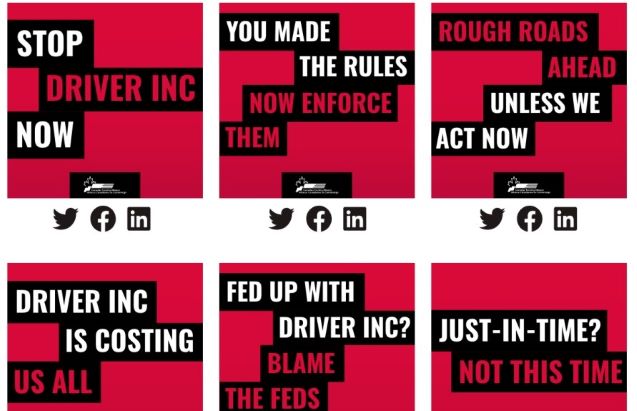 Nearly three in four Canadians (73%) support or would accept the federal government taking action to stop Driver Inc. – a growing labour misclassification scheme in the trucking industry, which forces or manipulates employees into filing as independent contractors so that the companies can avoid providing important labour rights and entitlements under the Canada Labour Code.

Fifty-seven percent of Canadians surveyed said they would ‘strongly’ support (33%) or support (24%) enforcement action while another 16% said they would ‘accept’ further action. Only 8% said they would oppose or strongly oppose such intervention. Support was highest in the four western provinces (61%-BC; 58%-Alta, Sask/Mb).

This view is shared by majorities across the country, across all demographic groups, and across supporters of all the main federal political parties.

When Driver Inc. was explained, 92% of respondents said the case against Driver Inc. was strongest because workers under the system do not have the same rights, protections and benefits as those working for compliant companies that don’t use the scheme. Fifty-four percent thought this was a good argument, while 38% said it was an adequate argument.

Furthermore, 84% indicated a good or adequate argument to enforce the law and stop Driver Inc was because the scheme deliberately funnels more than a $1 billion of unpaid taxes into the underground economy.

Additionally, 44% of respondents said the abuse of workers was the most “worrying” aspect of Driver Inc; while, alternatively, 36% said they were most concerned Driver Inc would push compliant companies out of business, further increasing pressure on the supply chain.

“Simply put, Driver Inc. is an unlawful scheme that involves gross labour misclassification, abuse of workers, forced labour and significant corporate tax evasion. It flies in the face of responsible business citizenship and undermines compliant companies who treat their employees ethically and lawfully,” said CTA president Stephen Laskowski. “Driver Inc. is not accepted by professional and responsible trucking companies, and as this survey clearly demonstrates, it’s not supported by hard-working Canadians, most of whom want the government to protect workers and ensure every business is paying their fair share of taxes, which is essential to critical infrastructure and social programs needed by all Canadians.”

The good news is the Government of Canada is listening to industry and beginning to escalate enforcement on Driver Inc. CTA was very encouraged that the issue was acknowledged in the Government of Canada’s Fall Economic Statement and more recently, Federal Labour Minister Seamus O’Regan committed to stepping up enforcement through “punitive” labour measures and tools.

These words have been followed up with actions throughout the fall. ESDC’s Labour Program has already taken steps toward enforcement measures against non-compliant employers. During its pilot project in Ontario, the Labour Program found about 60 percent of federal road transportation companies were misclassifying employees. Enforcement measures have included Administrative Monetary Penalties (AMP). In these situations, the Labour Program can publish the names of employers who have received an AMP.

The Labour Program is in the process of launching a national enforcement campaign against Driver Inc.  The campaign is expected to ramp up in 2023 as resources allocated in the Fall Economic Statement become available to the Department.

Meanwhile, CTA continues to work with other federal departments with enforcement capabilities, like the Canada Revenue Agency, to ensure tax compliance is also a priority.

The Abacus Poll was commissioned by the Canadian Trucking Alliance. It was conducted randomly with 1500 Canadians aged 18 and over, between October 21-26.