Hawkeye’s Jordan Wilson is Fighting for Kids in Need – Literally

A Kelowna carrier is stepping into the ring to fight for underprivileged youths, and he could use a few Canadian trucking companies in his corner.

Jordan Wilson of Hawkeye Holdings of Kelowna, BC, is willing to take some punches – literally – to raise money for the most underprivileged kids in BC who come from the worst environments imaginable. He’s training hard for a boxing charity event on July 23, which can be watched via livestream.

The event, Elevation Outdoors, is organized by Los Gatos Locos / Madkatz Boxing and Fitness in Kelowna. The mission is to raise money to enhance the lives of underprivileged youth via participation in specially designed outdoor sports programs like mountain biking, skiing and snowboarding; and to help youth develop lasting passions for these sports while drawing parallels to life through the experience and learning life skills. 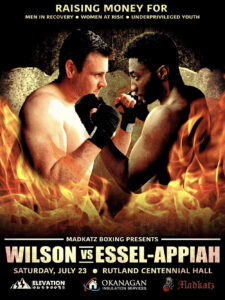 Wilson, a proud member of CTA who has participated in many of the Alliance’s charitable events like the Trucks for Change-led After the Bell program, says he stumbled upon the event while looking for a local boxing gym.

In Elevation Outdoors, he found an initiative that would help him get fit and, at the same time, feed his passion for helping those in his community who desperately need it.

“It’s just the way I was raised; I’ve been volunteering since I was 14 or 15 years old,” he tells CTA. “I feel that if you have the time and the means, it’s your civic duty to help those who need it. I have two kids and that’s what I try to teach them. When I think about this particular cause, I think about them and how lucky and privileged they and we are as a family. These kids we are helping with this cause, they come from the worst environments you can think of, so giving is the least people can do if they have the ability to help.”

Rather than just fundraising for his preferred charities, Wilson has decided this year to put his money where his face is. To make the event a true success, Wilson is collecting sponsorship donations from his peers and colleagues for fight night. All donations will be tax deductible for any personal or corporate donations over $20, and a tax receipt will be sent by the charity. He’s tasked with a fundraising goal of at least $1500 – 100 percent will go to the kids (ticket sales will pay for the event expenses).

CTA is asking the carrier and trades community to help Wilson shatter his goal. Donations can be made here. Please select Jordan Wilson as the “3 round hero” you are sponsoring.

This will be Wilson’s first fight – in or out of the ring. “I’ve never thrown a punch in my life – not even a schoolyard fight as a kid,” he says, tagging a laugh at the end. “The good news is we’re all amateurs – just regular Joe’s off the street so we’re all learning and training together.”

However, while Wilson’s opponent is the same size and weight, he’s also about 20 years younger. “He’s pretty quick and he can bounce around like a jack rabbit,” he says with a hint of cheerful nervousness. “I really need to work on my footwork and beathing for this match.”

And that’s exactly what Wilson will be doing when he’s not running a trucking company over the next four weeks until fight night. Not only is he working out at the gym, but he’s also spec’d out his garage with boxing equipment so he can sneak in a workout whenever he can.

“I’m definitely taking this seriously and pretty excited about it,” he says. The training and boxing is just a bonus. At the end of the day, it’s all about the kids and giving them something that they will never forget and skills that will last them a lifetime.”

As CTA members are aware, the Alliance is working with Trucks for Change and the BRTF to raise awareness and promote any charitable acts our members are involved in. If you would like any initiatives or events to be highlighted to the industry and the public in upcoming communications, please contact marco.beghetto@cantruck.ca with a short description of your event and any pictures.