To assist CTA members and others in understanding the upcoming ELD regulation, as well as helping them transition to an ELD environment, CTA has created the infographics below in English and French (scroll to the bottom of the page)

Imbedded in the infographic is a link to an informative whiteboard animation video that could assist carrier management teams, drivers and shippers in understanding the transition issues involved:

Meanwhile, the Canadian Council of Motor Transport Administrators (CCMTA) ELD Technical Working Group has released its second Canadian draft ELD technical standard, which spells out how the ELD must function and be designed by manufacturers from a technical perspective. CTA was very active in providing comments to the original first draft.

The CCMTA Working Group has been busy on the redrafting of the technical standard since last year, when the U.S. Federal Motor Carrier Safety Administration (FMCSA) released its final rule on Electronic Logging Devices (ELDs) and Transport Canada announced its intention to move forward with an ELD mandate for truck drivers who are currently required to maintain logbooks.

With the first iteration of technical changes now complete, the new draft standard is ready once again for review by industry and suppliers. CCMTA has allowed for the comment period to last over the summer.

As such, CTA will once again be working with Team Canada Elite and PDC members over the summer to gather comments. CTA’s ELD Carrier Working Group, which provided comments for the previous draft in 2013, will also be re-established.

To Download CTA’s ELD infographics in EN and FR see below: 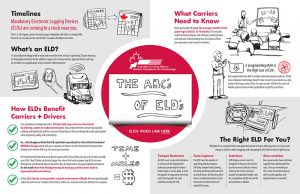 CTA members with questions concerning any of the ELD initiatives underway at CTA can contact operations&safety@184.107.41.75