Through Trucks for Change Network, several CTA carriers have rolled into B.C. to help victims of the wildfires by delivering vital goods to residents and emergency crews. It’s just the most recent example of charitable truckers who answer the call when disaster strikes somewhere in Canada.

See part of Today’s Trucking editor John G. Smith’s profile on Trucks for Change and its network of carriers below

…Increasingly, Trucks for Change is the organization that helps to pull everything together. As the B.C. fires began to spread, the network of 65 carriers joined with the British Columbia Trucking Association and Canadian Trucking Alliance to identify companies that were ready to move freight or provide warehouse space near hard-hit communities, and join like-minded businesses like Landtran in the effort.

“It’s nice to be in a position to help,” adds Pete Dalmazzi, who founded Trucks for Change in 2010. 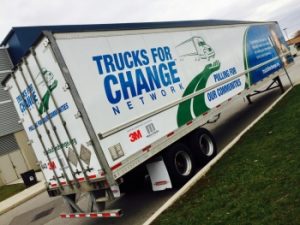 Participating carriers have collectively moved about 14 million pounds of freight overall, serving identified charities that have all been vetted through the Canada Revenue Agency, and not just in the wake of natural disasters like the B.C. fires. Donated food is moved regionally, provincially, and inter-provincially through a network of 500 food banks. Pallets of donated books have shipped to remote schools and communities through the First Book Canada literacy program. End-of-line fashion sourced through Brands for Canada has made its way to shelters helping women in distress. Winter clothing, sports equipment, and other supplies donated through Rotary International have been trucked to First Nations reserves in northern Ontario and Manitoba.

Much of the disaster-related work is done long before a fire or flood takes hold, too. The Red Cross relies on the network to feed supplies to three staging areas across the country, and also to repatriate unused goods once disasters are brought under control.

Individual carriers have long supplied such support on their own, of course. They still do. But Trucks for Change introduces some added structure to the contributions.

Norm Mackie of Mackie Moving Systems remembers driving through remote First Nations reserves in the 1970s, when relocating Ontario Provincial Police families. “I had a firsthand view of what really was happening. There’s a lot up there that needs help,” he says. Through Trucks for Change, his Oshawa, Ontario-headquartered fleet now picks up loads of donated goods, and interlines with Gardewine Transport for the final leg of the trips. “It’s whenever people can pull together whatever they have to ship,” he said. Whenever the need arises.

“It’s whatever you feel comfortable doing,” says Norm Sneyd, vice president – business development for Winnipeg-based Bison Transport, which most recently has shipped goods for the B.C. wildfire relief. And a company’s support can fit with any business model. While LTL carriers often reserve space for a couple of extra skids, his fleet has even moved intermodal freight for the Red Cross. “It might be on a lane that’s pretty convenient,” he explains, referring to the way opportunities can arise. “If we have an opportunity where we can donate service to an area, where we know we’re going to have a backhaul, it makes a lot of sense.”

Participating carriers use a central load board to find needs that have been identified by charities. “And every now and then you’ll get a call from Pete,” Sneyd adds. “He’s a pretty persuasive guy.”

“They are the who’s who,” Dalmazzi says of Trucks for Change supporters, rattling off a long list of well-known carriers that participate.

All it takes is a $250 annual membership fee and proof that the business is licensed and insured.

“I think some people are concerned everything has to be done for free,” says Natalie Meyers of Mortrans, a truckload and dedicated service based in eastern Ontario. That’s not the case. “If you can offer it for free, that’s great. Offering it at cost for [charities], that’s huge, too. Their budgets are spread pretty thin.”

“It doesn’t stop people from doing what they’re doing now. Most carriers I know who are involved, they’re doing other charitable works,” she adds. But even when the other goods are moved, the network offers a place to report the good deeds and spread the word about the industry’s support to the general public.

Says Mackie: “If nothing else, it’s kind of a feel-good thing when you’ve gone home at night.”

To participate in Trucks for Change, visit www.trucksforchange.org.