Lane Kranenburg,  formerly the owner of Lyal Custom Carriers director in Calgary and the popular executive directly of the Alberta Motor Transport Association (AMTA), passed away on February 13. He was 77.

Lane was a husband, father, brother, uncle, friend, mentor, entrepreneur, leader. He was surrounded by the love of his family when he passed. 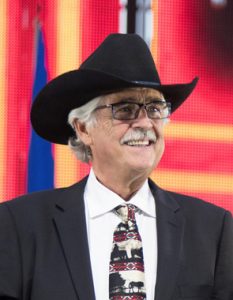 Lane brought his values of integrity, hard work and respect for all to every role he filled throughout his career – first as a young Edmonton Police Officer, then co-owner of Lyal Custom Carriers, as a leader for AMTA – both as the director of the association, then as manager of the Partners in Compliance program. He also served at U of C’s Centre of Transportation Engineering & Planning.

Throughout his career, Lane had a passion for industry safety and driver well-being. He co-chaired an international steering committee on commercial driver fatigue. Lane was often behind the wheel of the truck that delivered the stage each year to the Professional Truck Driving Championship and would then be found behind the microphone as MC of the popular event.

“He was a great mentor of 45 years,” Board Member Gene Orlick told the AMTA. “I will miss him dearly.”

Giving back to the community was one of Lane’s passions. He was overwhelmed in 2017 when the Calgary Stampede awarded him their highest honor, a Stampede Life Member. And, in 2019 Lane was the recipient of Canada’s Sovereign Medal for Volunteers. Lane was not one to miss an opportunity to celebrate, so a “Party for Lane….Just Because!” was held August 25, 2019. Family and friends came from as far away as Holland to hear Lane’s life stories and enjoy photos from a life well lived.

A memorial service will not be held. Lane is survived by his wife and partner of 56 years Vicki, his treasured children Leen Kelly Kranenburg (Kathryn) and Kathleen Kranenburg (Ian Wright) and cherished granddaughters Annalise, Lauryn and Julianna. Lane is lovingly remembered by sisters Nelly and Konnie and brother Jack (Jan). ‘

In lieu of flowers, if friends or family desire, memorial tributes may be made directly to either The Salvation Army Agapé Hospice (www.agapehospice.ca) or to Pacific Assistance Dogs – Calgary (www.pads.ca/give-now)

“Lane wanted his family and friends to know he was a better person for knowing you, working alongside of you and for learning from you. He was grateful for all your love and caring over the past years,” the family stated in an obituary.