In a recent issue, Truck News conducted a lengthy Q&A with Norm Sneyd, Bison Transport’s vice-president of business development, to discuss how carriers can protect themselves from cargo crime:

TN: Norm, cargo theft has been an issue for a long time, but it seems we hear more about it today than in past years. Is this because it’s become more prevalent or is it more a matter of the industry finally taking some action?

Sneyd: I think it’s a combination of both. There’s a lot of cargo theft going on today and there’s a renewed focus on dealing with it. I know that industry is working a lot closer now with law enforcement than they ever did. I think that’s important. As a carrier, our focus is on prevention. We do what we can to ensure that the cargo is protected at any given time and we’re not at risk.

However, when something goes amok, then we depend on law enforcement to work closely with us and try and get that cargo back. There are different organizations out there now that are working with us, CargoNet being one of them. We have a good relationship with them and they’re working with law enforcement to recover loads and making the industry aware of where there’s risk, where there’s been instances where trucks had been stolen.

We need that information to allow us to be a little more proactive. At the end of the day, we depend on law enforcement to find the load if something goes missing. The other thing is, I don’t know if the courts are as stringent in dealing with these criminals once they’re caught.

There was a documentary probably four or five years ago and they actually interviewed somebody that had been hijacking loads and the comment that that individual made was, “There’s not a lot of risk here because the penalties aren’t severe.” The courts have to really take a hard stand on these guys and once they’re convicted, the penalties have to be more severe in my opinion.

TN: You mentioned that collaboration with law enforcement and their involvement is necessary. One of the things that we’ve heard is that in the past some carriers will not report stolen loads because they didn’t think there would be enough action taken. Why is that not the right approach to take? 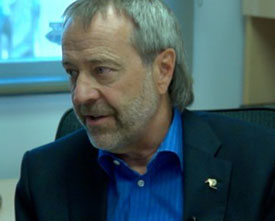 Sneyd: If you don’t report it, you’re never going to have the chance of getting it back. The minute it happens, there is a chance that if you respond quickly enough that you could get the load back. Reporting it is a no-brainer. Report it immediately and get working on it as quickly as possible.

TN: One of the keys to preventing cargo theft is keeping the bad guys out. What do you do at your facilities to make sure that they’re not able to wander in and take off with one of your loaded trailers?

Sneyd: Well we’re very protective of our facilities. Our yards are monitored closely. There’s a fence, there’s cameras and we’ve got in many of them guards in a security hut. We have, in some cases, mobile units. We only want people that are authorized to be in the property. If you’re not authorized to be in the property then you’re not going to get in.

That goes for our own fleet. Our drivers are equipped with swipe cards. If the driver shows up and he doesn’t have his ID or his swipe card, he’s not getting in the facility. He’s being turned back to dispatch and we’ll deal with that matter at the dispatch level.

If you’re a third-party carrier coming to pick up a trailer, the guard hut is notified in advance so they know you’re coming. If you show up unannounced, you’re not getting in the yard. If you’re a visitor, you have to have a reason for being there.

A car will not be allowed on the property unless there has been earlier notification that he or she was going to show up at the facility. It’s got to be authorized by the right person at Bison. Getting on the property is very difficult and we want prior authorization for you to be there.

TN: You take all these measures and the cargo you’re protecting, in most cases, doesn’t even belong to you. How important is it to your customers that you’re going to these lengths to prevent theft?

Sneyd: Let me tell you, you’ll understand quickly how that ownership transfers to you as a carrier when that load goes missing. When a customer contracts with us to move their freight from A to B, one of the parameters is you get it there.

If you don’t get it there and it goes missing, then you own that load. Our goal is to pick the freight up on time, deliver it there on time and get it there in the same condition that it was picked up in. That includes getting the load there intact.

TN: What about the people you hire? A lot of cargo theft originates outside your facilities but in some cases it originates from inside. What do you do to ensure that you’re not hiring someone who could be contributing to the problem?

Sneyd: Well, we do all the background checks and searches that you can possibly do to make sure that the right driver gets into your system. We want all of our drivers to be FAST-eligible, so with that comes a number of checks and searches to ensure that there aren’t any issues. However, we also realize that the wrong person can get into the system and you’ve got to pay attention to that.

One of the things that we’ve done is, we’ve created a program called Neighbourhood Watch. We’ve gone to our fleet and all of our employees and we’ve asked them to stay focused when they’re in our yards and to report anything that might be suspicious. There’s a reward paid out if it leads to a conviction.

What it does is, it might put 2,500 pairs of eyes on our facilities at any given time. When a driver comes in, he’s looking around. We have a number of things that have been reported to us – suspicious behaviour – and we follow-up on that.

To me security is just awareness, it’s focus. I think that our fleet is very proud of our business and wants to protect it and will report things that they feel should be reported and could be suspicious and we follow up on all of them.

TN: With all the technology that’s available to you and the increased dialogue that we see today between law enforcement and carriers, how hopeful are you that cargo theft can be stamped out completely?

Sneyd: That’s not going to happen. I think we can reduce it considerably … At the end of the day, I don’t believe we’ll ever eliminate it completely because we’re dealing with people that are bound and determined. They’re going to be successful and they’re taking different steps to work towards that goal. We’ve just got to try and stay a step ahead of them and do whatever we can to make it very difficult for them to excel at their trade.