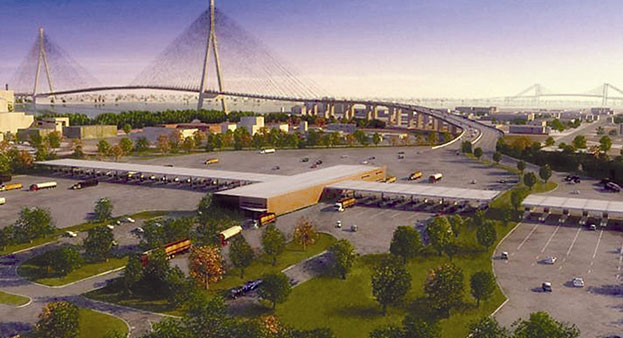 The presentations included information on the bridge being constructed with Nexus and Trusted Trader processing centres on site, as well as being equipped with the latest RFID and licence plate reader technology, which would allow the border officer to review customs information prior to a truck’s arrival at the border. The facilities will also include multiple truck inspection bays, and fixed non-intrusive large scale examination buildings, which will allow for trucks to be examined without lengthy physical examination being done.

Representatives from both agencies indicated that accommodations and spill containment plans allowing for the transportation of dangerous goods, and the use of the bridge for oversize loads, would also be made. The lack of available truck parking and issues with truck queueing at various bridges was also raised, specifically when border processing issues occurred, such as the recent CBSA system outages. Officials from WDBA indicated extra parking and additional space for vehicle queueing will be available for commercial users in some of these instances.

The potential for the use of autonomous vehicles on the bridge was also mentioned, with officials from WDBA stating that provisions to account for the use of this technology in the future will be made. The panel also indicated there are no current plans for cargo pre-clearance or pre-inspection sites on either the Canadian or U.S. side. Carriers hauling food items and temperature controlled goods that are subject to inspection will have access to refrigerated areas to store goods while inspections are being completed.

“OTA is encouraged by these developments to ensure the bridge accommodates the needs of its future commercial users and takes advantage of emerging technologies that will help provide the most efficient border crossing experience possible,” says OTA’s Lak Shoan. “It shows things are on track.”

OTA staff will continue to take part in these stakeholder meetings. Members who would like to submit feedback to OTA regarding the project and other border processing technologies, can send comments to otacustoms@ontruck.org.