Are incorporated drivers ready to file their taxes properly and are certain carriers prepared to start handing out T4As to all drivers and comply with all federal and provincial labour requirements?

Those are among the questions the Canadian Trucking Alliance is asking the trucking industry in print ads which will begin appearing in trade publications over the next week.

The ads are meant to alert the trucking industry to Canada Revenue Agency’s recent clarification that it will accelerate the enforcement of incorporated drivers treated as Personal Service Businesses (PSBs), which are not eligible for small business tax deductions, as well as require companies to issue T4As to all self-employed contractors.

Many people incorporate for legitimate reasons. However, this does not mean that all incorporated truck drivers are owner-operators or small businesses,” says CTA president Stephen Laskowski. “Many, who do not own/lease or operate their own vehicle and receive payment without the proper source deductions, are either willingly or unknowingly engaged in a scheme commonly referred to as Driver Inc.”

According to CRA, Driver Inc. operators are actually considered by the agency to be PSBs and should understand the consequences of choosing to improperly file taxes as independent, incorporated businesses. 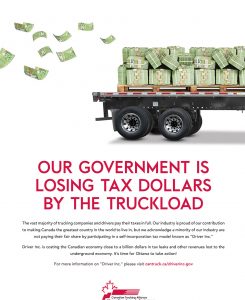 The ads, which will be published in various Newcom trade magazines in English, French, Punjab and Polish, direct readers to a website page that fully explains the tax responsibilities of both drivers and carriers and the consequences for not complying.

Meanwhile, another CTA ad will appear in the Hill Times newspaper starting in December reminding government officials and policy makers of the tax revenue leaks caused by Driver Inc. and the importance of government support for enforcement agencies and increased penalties to combat the issue.