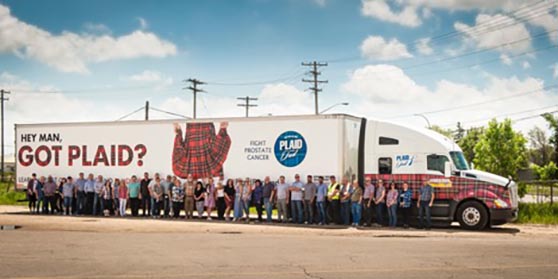 Call it a threepeat. For the third consecutive year, companies from the trucking industry led all organizations in raising money in the fight against prostate cancer and in support of Prostate Cancer Canada’s Plaid for Dad fundraising campaign.

The coveted plaid vest – awarded to the campaign’s top workplace fundraiser – went to Winnipeg-based Arnold Bros, which raised more than $19,000 of about $50,000 raised by 20 trucking carriers and suppliers.

While it’s the first time an individual fleet has won the award, Arnold Bros was also the top individual earner in helping to bring the title last year to the Canadian Trucking Alliance, which followed up on the Ontario Trucking Association’s top finish in 2016.

This year the mantle was picked up by Trucks for Change, which continued the tradition of coordinating industry efforts under one banner.

“It kind of took on a life of its own,” Arnold Bros. finance director Carla Kaneski told Today’s Trucking magazine. Employee activities such as draws, donations and barbecues in Winnipeg and Milton, Ont., raised $4,500 alone. That was matched by the fleet and then supplemented through supplier donations.

There’s a natural fit between the fight against prostate cancer and the trucking industry’s male-dominated workforce, Pete Dalmazzi, president of Trucks for Change, told the magazine. “I think carriers understand the demographics of their workforce … there was almost no one I talked to that didn’t say a couple of my drivers or good friends in the industry are suffering right now.”

“The companies that are doing it have jumped in with two feet,” he adds.

Other carriers who have strongly supported the campaign over the years include Steed Standard Transport Rosenau Transport, Tandet Group and XTL Transport.